Trans Awareness Week: celebrating the role of trans people in the fight against HIV 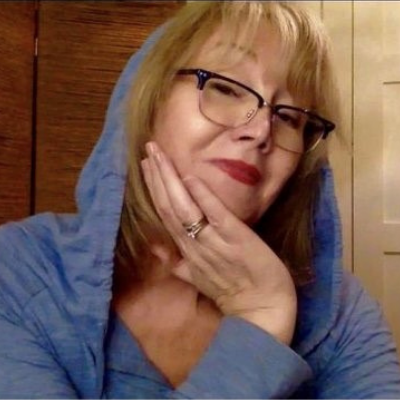 In the 1980s, there was a lot of misleading information around people living with HIV. Lots of people I knew were getting ill and I hated how misunderstood the condition was - people never talked about “HIV”, only “AIDS” - as though that were something which could be transmitted. I was angry and found myself screaming at the telly a lot. I decided that I needed to do something. So, one day in 1988 I phoned up the Terrence Higgins Trust (THT) and was invited to a job interview.

Before I knew it, I was sitting with a cup of tea and chatting with community-coordinator Sal Rossito. It came up casually in conversation: “Well, I am trans” (I actually said transsexual – it was 1988 and the term “trans” came a few years later). Sal said, “Can you start tomorrow?” Now, that was a first! Usually this was followed by people asking all sorts of questions, such as “Which toilet would you want to use?” To which I usually replied, “One that works, preferably.” 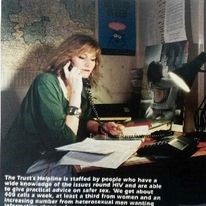 I agreed to start the following day. I would spend my days speaking to all sorts of people. People who were worried about HIV - at the time test results could take over 2 weeks added to people’s anxiety. People who had just been diagnosed. People wanting support, counselling, and peer support; people coming out about being gay and living with HIV. There were always trans people, too, but there weren’t any services at the time which supported trans people specifically. Some trans people were uncomfortable about phoning up these helplines because their voice might not have matched their gender identity and there was a risk of being misgendered.

Back then, there was less political organising, compared to now, from the trans community, and less expectation of an informed service. Being excluded was par for the course. When I did speak to trans people about HIV, I was sometimes told not to talk about it, because it was stigmatising - and being trans was already a stigmatised identity to begin with. It was seen as a gay issue, so there was a concern that being associated with HIV would lead trans women to be viewed as gay men, rather than trans women. There was no real organised structure of trans support, and a lack of inclusion from the wider LGBT community (although we didn’t use the term ‘LGBT’ then.)

By 1990 I had become THT Helpline group leader and trainer, and a counsellor with individuals and couples.  From 1996 onwards, there was a substantial change in terms of effective medicine becoming available, and more trans people coming forward. I came to realise that trans people living with HIV and wellbeing needs were often ignored. There was no information whatsoever for trans people. A lot of trans people were anxious about how hormones and HIV medication might interact with one another, but it was impossible to find any information about this. There was no research, no funding to support trans people or include us in any kind of awareness. Nothing. That was the reality of it.

In 2010 I had the idea for a space for trans people to talk about sexual health and HIV - this was to become CliniQ in 2012. The first organisation of its kind in Europe: CliniQ has now spent ten years delivering HIV, sexual health and wellbeing services for trans people. During that time, I worked with Public Health England to make the HIV & AIDS Reporting System (HARS) trans-inclusive. As of 2017, for the first time ever, we have data on trans people living with HIV in the UK.

It took a very long time to get to this point, but things have changed for the better. Have they changed enough? Probably not. At CliniQ, we have a nine-month waiting list for our counselling services. The lack of funding for trans organisations is an enormous problem. I’m proud of what we’ve achieved with CliniQ, but I hope that one day it no longer has to exist. I don’t see that happening for a long time. I want local services to be informed about trans people. I want every trans person to be able to visit their local GP without being told, “Oh no, we don’t do that” and being shunted off somewhere else. Every single NHS service must become trans-inclusive.

It’s important to remember the role which trans people have played in the history of HIV. We are erased all the time, even today. The part we’ve played in so many things is minimised or ignored. And that sends a huge message, not only to people like me and other people of my age, but to younger people. It says, “You have no history.” It says, “You don’t count.” So, it's important to send a message to younger people. If something like CliniQ can happen, then you can do it too.

Guest blog to mark Transgender Awareness Week 13 - 19 November 2021 by Michelle Ross – Michelle is the founder of CliniQ and Director of Holistic Wellbeing Services, with an overview of how its services work holistically, and she is the lead on CliniQ’s training programme. Michelle has been involved with sexual health, HIV & well-being for over 30 years. She is a member and director of IRGT: A Global Network of Trans Women advocating for trans issues in the international HIV response.