Diana & HIV: we remember our patron 20 years on

One year before she died, in the summer of 1996, Diana, Princess of Wales, resigned from almost 100 charities of which she had been patron or president. Instead she chose to concentrate on just six which she felt most passionately about. One of them was the National Aids Trust, which this year celebrates its 30th anniversary.

Looking back on the intervening years, as I prepared for the anniversary of Diana's death, it is staggering to see how much has changed. The story of HIV today is a galaxy away from the story of HIV in the 1990s. Yet much of the stigma and ignorance at the heart of the isolation experienced by many who live with the condition still remains. I wonder what kind of relationship Diana would have had with our work today. 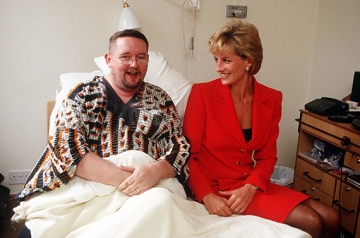 Diana with a patient at London Lighthouse in 1996

Princess Diana's passion about HIV was an unprecedented meeting between the British establishment and a controversial cause surrounded by huge public misunderstanding and distrust. She could have limited her support to “safe” causes, and if she had, it is hard to imagine when the public would have learned that it was OK to touch somebody living with HIV. There can be no doubt that Diana was responsible for one of the biggest shifts in public awareness of HIV and AIDS that has ever taken place.

Though it seems unusual, it is easy to see why HIV became so central to Princess Diana's work. For years she had focused on vulnerable communities where HIV risk was higher, such as the homeless and drug users. Speaking with colleagues who were involved at the time, I know that Diana's patronage went way beyond seeking media opportunities, and that she showed an ongoing commitment to understanding HIV and making a real difference. One historic and highly-publicised moment that seemed to stand out amongst it all.

In April 1987, Diana opened the first dedicated HIV and AIDS ward at London Middlesex hospital. In front of the world's press she held the hand of a man who lived with HIV. Derek Bodell, one of my predecessors as chief executive of NAT, explained how that would have meant as much to her as it did to those who saw the memorable images all over the news:

"The reaction that it caused must have helped her realise how much impact her involvement could have. In an instant, the image of a gloveless Princess Diana laid to rest a lot of misinformation about how HIV was transmitted which was appearing in some of the more unhelpful press."

Over the years, her embracing of adults and children with HIV, and commitment to the issue sent a strong message of inclusion and support for people with HIV rather than isolation and discrimination. 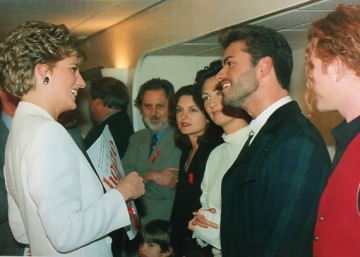 Diana chatting with star performers and NAT staff at the Concert for Hope, organised by NAT for World AIDS Day in 1993

This was a historic moment; even today, we regularly see people seriously misunderstand how HIV is transmitted.

Perhaps as important as the myth-dispelling effect Princess Diana had was the progressive statement she made simply by choosing to support HIV, a perfect example of the down to earth approach for which she is remembered by so many. She reached out to those who the public saw as immoral, dangerous, lost causes and outsiders – and yet she captured the hearts of the nation. In her public and unapologetic support for such people, Diana did what before had seemed impossible: she shamed those who sought to marginalise those living with HIV.

In recent years, it's clear that the public attention and challenge that Princess Diana helped create has waned. When NAT fought for access to PrEP (a daily pill that prevents HIV infection) on the NHS, some of the same voices that celebrate Diana's legacy expressed egregious attitudes towards would-be PrEP users. This incredible, cost-effective tool, that allows people to take responsibility for their own sexual health rather than relying on a partner, was branded a “promiscuity pill”.

I do not wish to put words in anyone's mouth, but it is easy to imagine how Diana would still be fighting our corner today. No disease has ever been cured and no epidemic ever stopped by ignoring new science and innovation. I doubt that Diana, at such an exciting turning point in treatment and prevention, would have turned her back on HIV. As it is, we can only mourn a woman who stood up for our society's most vulnerable people, even though she did not have to.

This article originally appeared in the Telegraph

Social care and support
Rights, equality and discrimination
Previous
Next