Press releases and statements about HIV and related topics

National AIDS Trust, Terrence Higgins Trust (THT) and The Love Tank are backing the wide sex-worker led opposition to efforts to enshrine the ‘Nordic’ or ‘end-demand’ model for sex work in law. 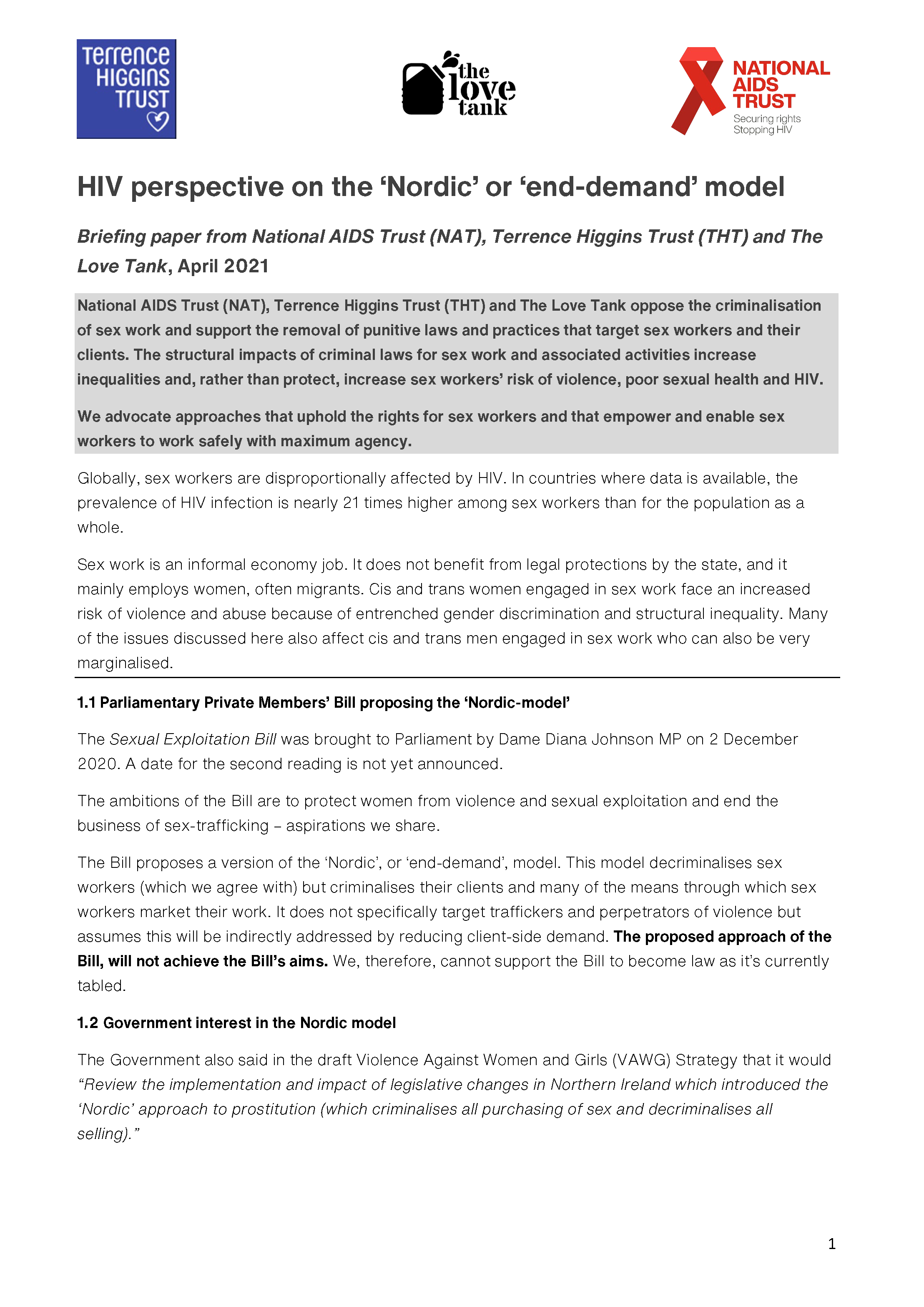 This model decriminalises sex workers (which we agree with) but criminalises their clients and many of the means through which sex workers market their work. The Nordic-model, shifts demand to increasingly unsafe spaces, increasing exploitative practices and removing the possibility of choice and control.

The three organisations have written an open letter to Diana Johnson MP, and others supporting her Sexual Exploitation Bill, to highlight why the model proposed in the Bill increases the risk of harm to sex workers.

An accompanying briefing paper has also been published today, explaining that the criminalisation of sex work obstructs evidence-informed HIV responses and increases vulnerability to HIV and other sexually transmitted infections (STIs). The Government has committed to the goal to end HIV transmissions by 2030 and to achieve this cross-government action is needed to tackle social and health inequalities driving HIV risk.

The briefing paper is also being shared widely with other MPs and the three organisations are urging those considering support for this Bill, or for any proposed amendments to the Police, Crime, Sentencing and Courts Bill that would similarly introduce the model, to hear sex worker voices on this issue.

This model doesn’t work. It harms rather than protects.

As the UK’s leading HIV and sexual health charities, National AIDS Trust and Terrence Higgins Trust work to end the transmission of HIV in the UK and ensure people have the ability to enjoy good sexual health.

While we await a date for the second reading, we are writing to express our opposition to the Sex Exploitation Bill as currently tabled on 2 December 2020.
We do support the Bill’s ambition to protect women from violence and sexual exploitation, but do not believe the proposed policy approach will achieve this. The Bill proposes introducing the ‘Nordic model’ which would decriminalise sex workers – an aspiration we share – but it criminalises their clients and many of the means through which sex workers market their work.

This would in effect criminalise sex workers by proxy, shift demand to less safe spaces, and increase the threat of violence and other harms as clients would be forced underground, making it more difficult for sex workers to manage risk, including risk of HIV and poor sexual health.

The Bill assumes the perpetrators of violence will be indirectly addressed by reducing client-side demand, this claim is without substantial evidence.

The view of HIV charities, both domestic and globally is clear, and there is robust international evidence that punitive legal and social environments are key determinants in increasing the risk of HIV. UNAIDS states that ‘such environments have been shown to limit the availability, access and uptake of HIV prevention, treatment, care and support for sex workers and their clients.’ Globally, sex workers are disproportionately impacted by HIV, with rates of new cases of HIV nearly 21 times higher among sex workers than the wider population.

In Northern Ireland, where the ‘Nordic model’ was introduced in 2016 the sex worker organisation, National Ugly Mugs, states there has been no decrease in the number of sex workers, but a 92% increase in violent crime against sex workers reported to them in the two years after the purchase ban. France has introduced a similar law, which resulted in nearly four in ten (38%) of sex workers stating they were now less likely to use condoms.

The policy proposals in this Bill also run counter to the UK Government’s ambition to end new cases of HIV by 2030. This is an ambition also shared by opposition parties. We have welcomed the confirmation by Ministers that the Government’s up-and-coming HIV Action Plan will ensure progress is made in all demographics impacted by HIV, this must include sex workers. Increasing sexual health inequalities experienced by sex workers, risks undermining efforts to end the HIV epidemic. The ability of sex workers to initiate harm reduction strategies, including condom use, are vital to reduce potential HIV transmission and other STIs.

Finally, the experience of many sex workers due to COVID-19 restrictions has resulted in either their income freezing or individuals having to go underground to avoid indirect criminalisation. We have heard that this has often increased the likelihood of sex workers agreeing to condomless sex and the use of drugs during sex. Lessons should be learned from this period when considering any changes to laws concerning sex work.

In line with our commitment to involve and amplify the voices of people directly impacted by HIV and poor sexual health, we are in dialogue with the campaign group Decrim Now to discuss these issues in more detail.

Enclosed you will find a detailed joint briefing further outlining the evidence and reasons for opposing this Private Members Bill as currently framed.
We would be happy to meet with you to discuss these issues in more detail, and to facilitate discussions about how we can achieve these shared goals of protected women from violence and sexual exploitation, through alternative approaches than the Nordic model.